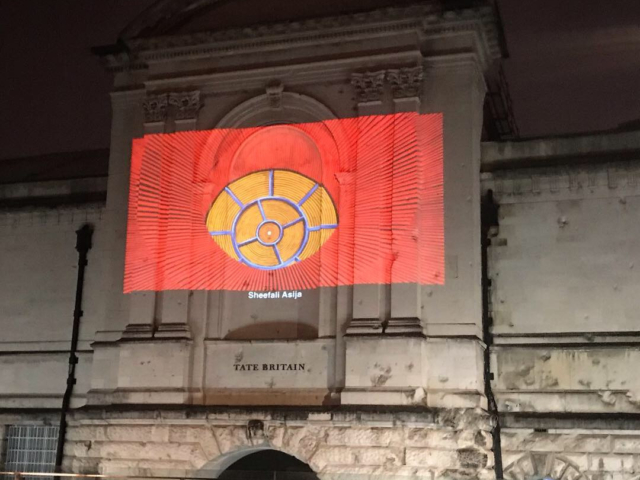 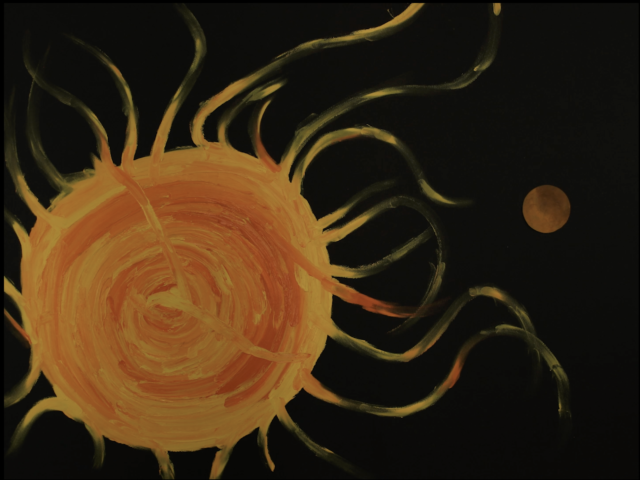 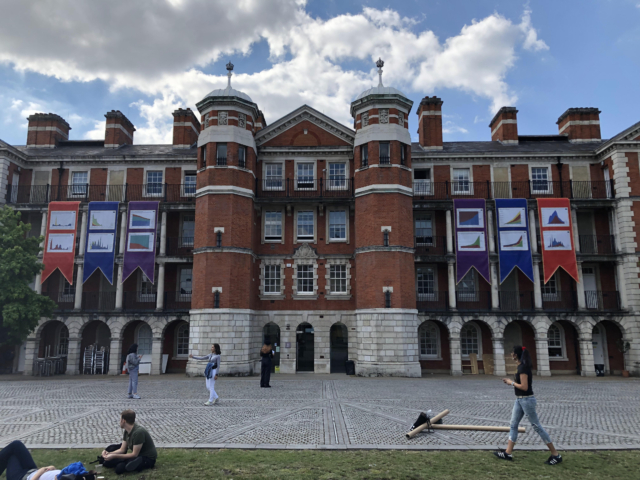 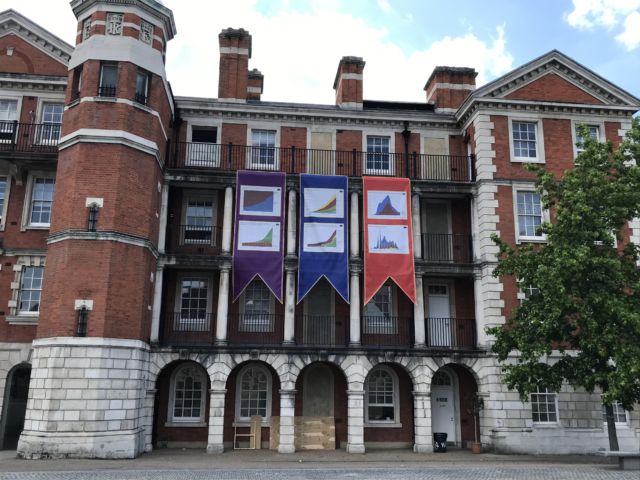 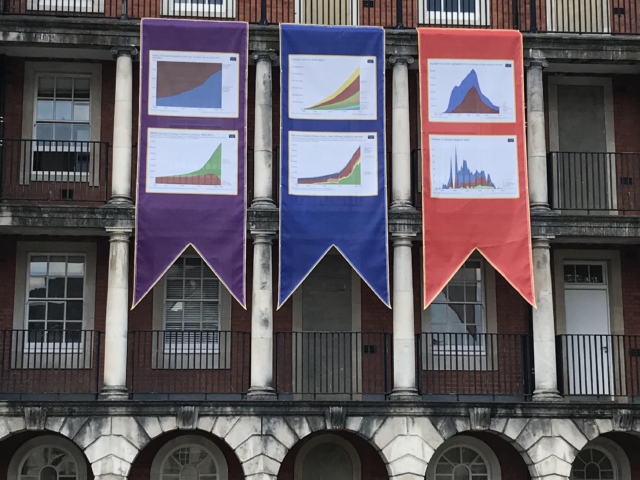 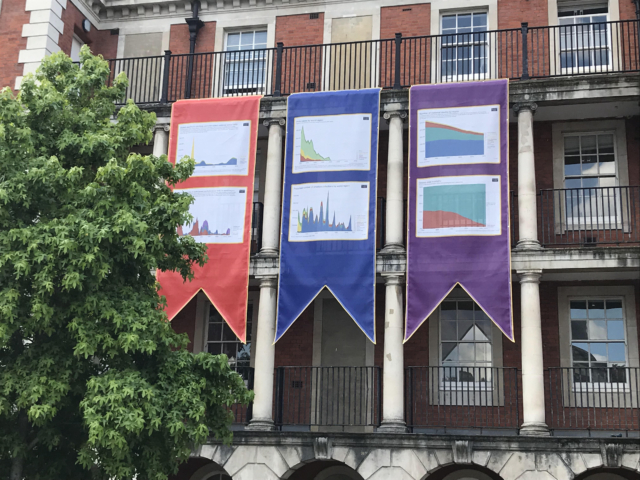 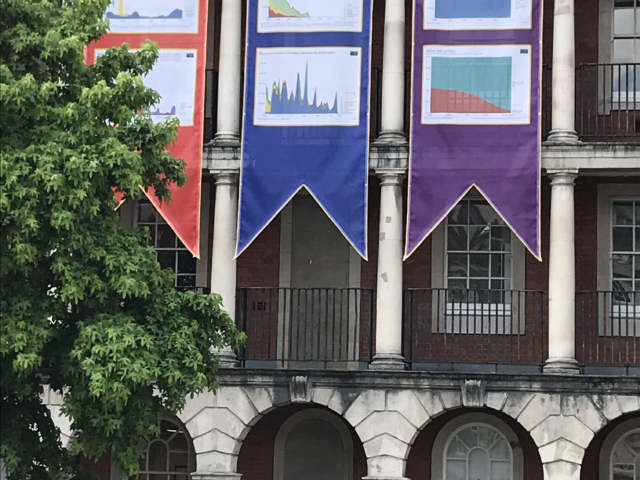 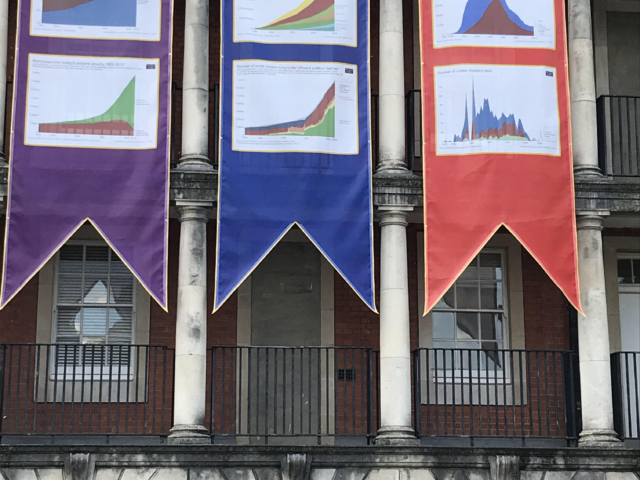 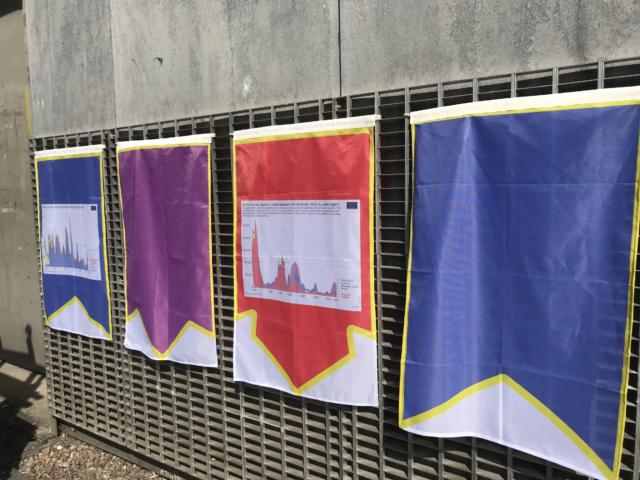 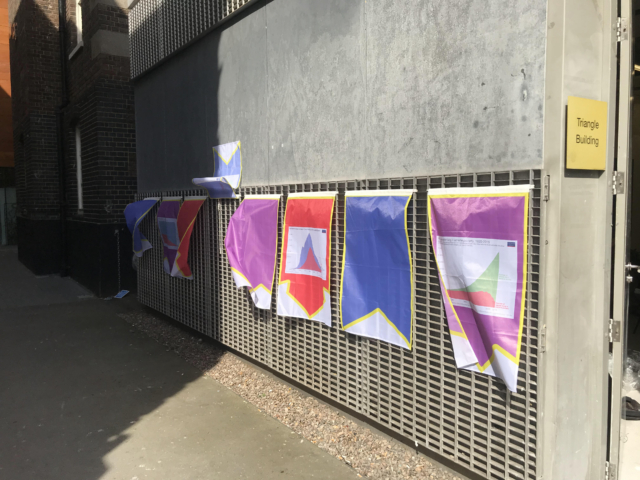 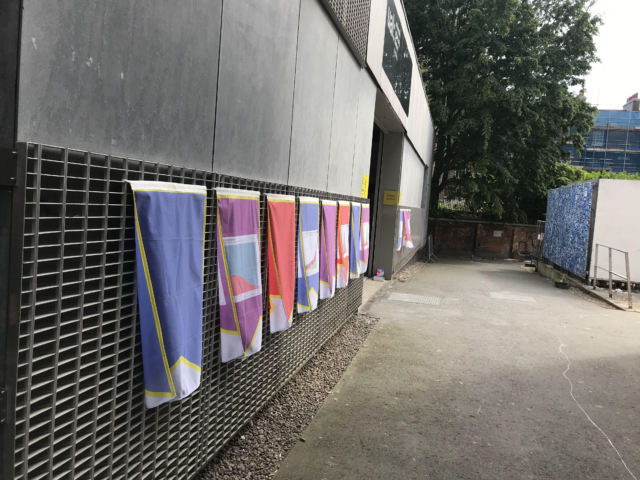 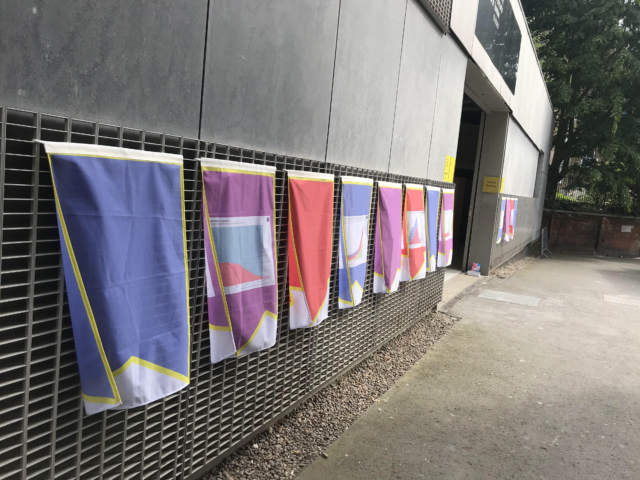 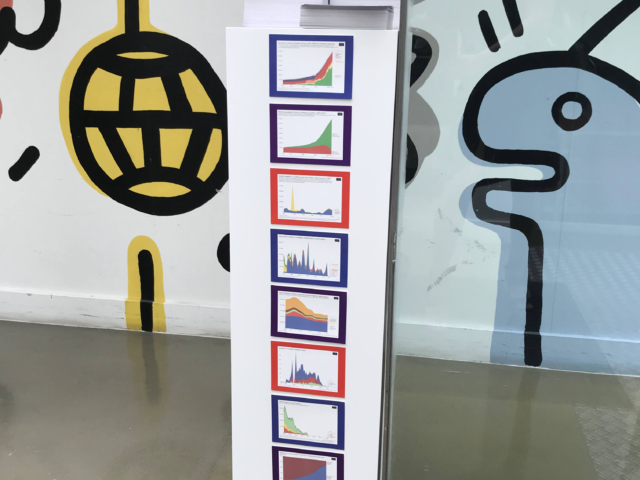 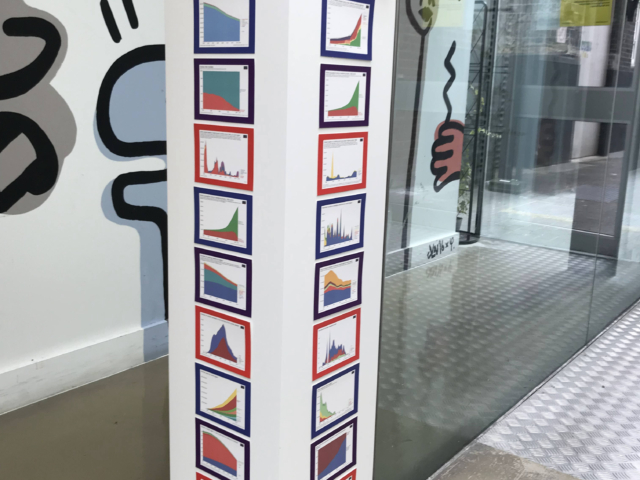 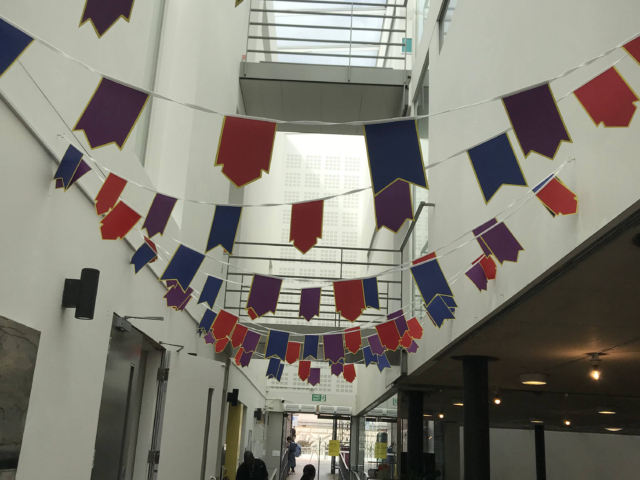 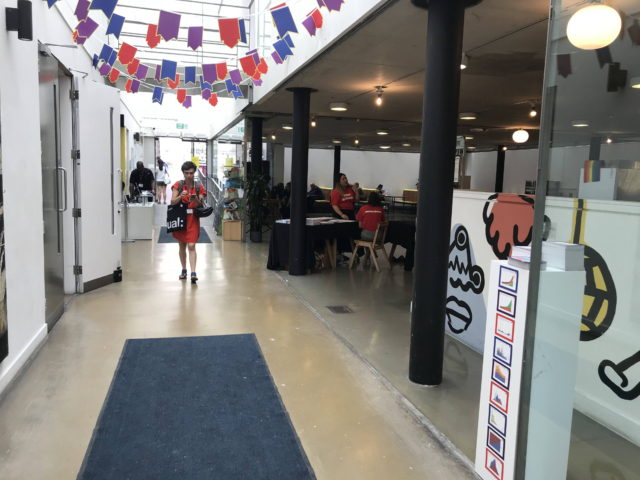 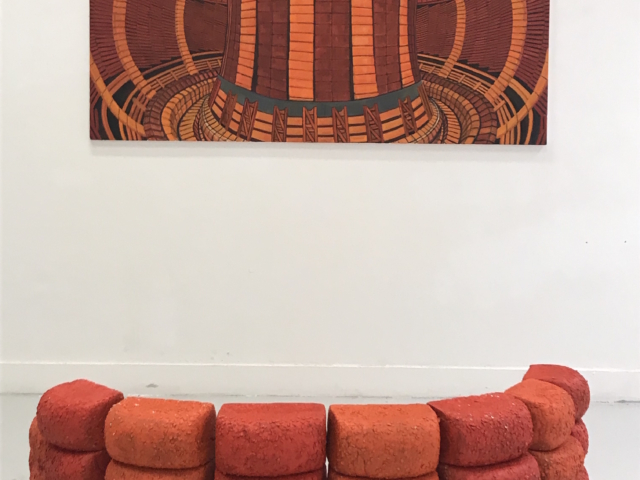 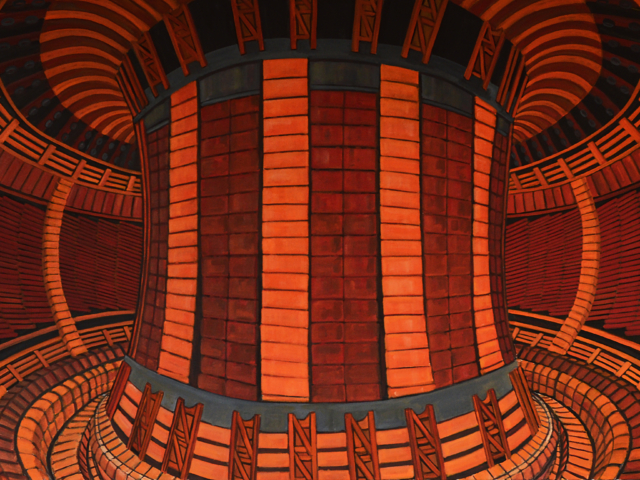 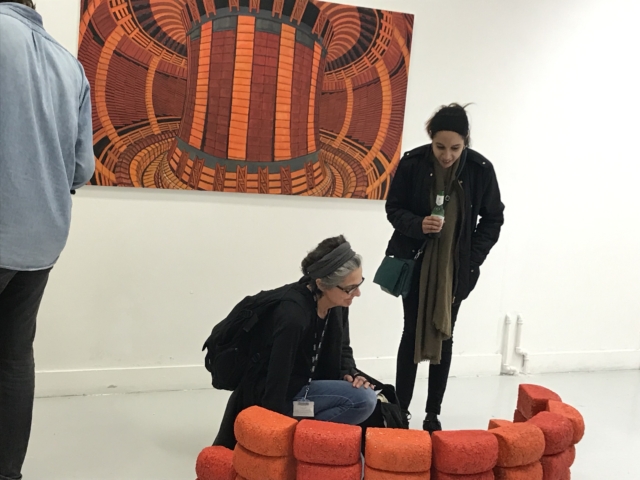 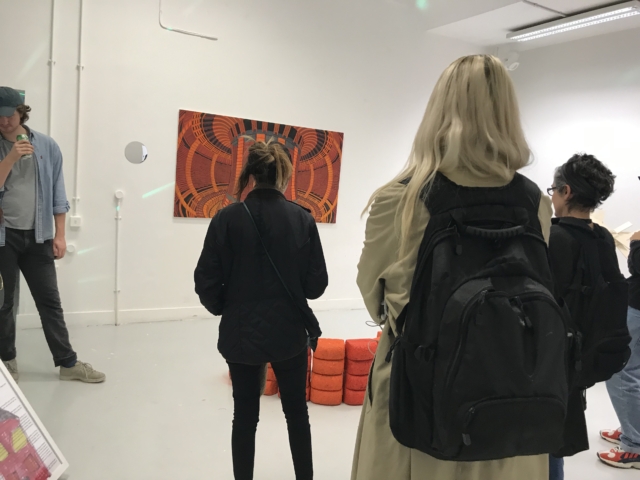 VIRTUTIS PREAMIUM: THE REWARD OF VIRTUE: a campus wide installation of banners, flags, buntings and postcards

In 2019, I created a campus wide art installation – ‘Virtutis Praemium – the reward of virtue’using banners, flags, buntings and postcards in an attempt to get people to think about virtue in our modern 21st century.

I was intrigued by the idea of how a society determines what behavior is worthy of such esteem – essentially what it considers ‘virtuous’ – that the individual displaying said behaviour is immortalized both in terms of material (bronze or stone) and elevation (aloft, above us less virtuous mortals).

And how this determination changes over time.

What kind of achievements are the results of what we now consider virtuous behavior?

I think that embracing humanism, recognizing the power of conditional optimism and deploying the vast arsenal of tools and techniques derived from our scientific understanding of the world over the last 200 years has led to the greatest achievements in the history of mankind. The extraordinary improvements in child mortality, the spread of literacy, the moving of billions of people out of abject poverty, the eradication of terrible diseases such as smallpox and polio. 200 hundred years ago 40% of all children under the age of 5 would die – today. That number globally is 4%. These achievements are the result of virtuous behavior. They are the reward of virtue. But they are achievements that will not be sustainable if we do not continue to behave virtuously.

It therefore seemed logical to me to look to the monumental, the massive as a means of communication. I appropriated the model of heraldic banners and flags as a practical way to achieve the monumental but instead of the emblems of a great family with battle honours I placed infographics that illustrated the ‘battle honours’ of science. Virtutis Premium – the Reward of Virtue.

Continuing with my conceptual focus on machines embodying scientific progress, here is a mixed media project I did for our group show in December 2018 show ‘Fornax transformed  – a Nuclear Fusion love story’, mixed media, oil painting 182X122cms, 36 loaves of bread. Fornax was the divine personification of the oven in ancient Roman religion and was evoked especially.in the baking of bread.

With this work I wanted to engage viewer curiosity about nuclear fusion and foster a debate around its possible future in our society as a source of safe, non-carbon emitting and virtually limitless energy. Fusion is the nuclear reaction that powers the Sun and the stars. In the tremendous heat and gravity at the core of these stellar bodies, hydrogen nuclei collide, fuse into heavier helium atoms and release tremendous amounts of energy in the process.  It is this energy that makes all life on earth possible.

Civilisation is dependent on access to energy and over time the technology that we have developed to provide that energy has changed allowing civilisation to advance. Loaves of bread are the end result of the same life-giving nuclear fusion energy (i.e. wheat plants dependent on energy from the sun) coupled with human technological innovations: domesticated crop cultivation and bread making! Indeed wheat is one of the technology ‘innovations’ that human civilisation was originally built upon.

Wheat was domesticated around 10,000 BCE in the Fertile Crescent (modern day Iran) where humans developed what was one of the world’s first domesticated food crop from emmer and einkorn grasses. Wheat alongside other plant and animal domestication led to humans being able to become sedentary, led to the rise of the first cities and effectively ‘powered’ civilization out of the stone age. Nuclear fusion represents a potential step change in technology that would ultimately lead us into the next great epoch in the history of human civilisation: the Fusion Age – characterised by the availability of ubiquitous clean energy.

For the painting I started with images of the tokamak and reduced the various machine parts and cables to simple geometric shapes and created repetitions and rhythms within the painting.  The tokamak is an doughnut shaped experimental machine designed to harness the energy of nuclear fusion. Inside a tokamak, the energy produced through the fusion of atoms is absorbed as heat in the walls of the vessel. Just like a conventional power plant, a fusion power plant will use this heat to produce steam and then electricity by way of turbines and generators.

Spray painting the loaves and arranging them, in forms similar to the forms in painting is my attempt to bring the audience ‘in’ or the painting ‘out’.

The disproportional influence of fossil fuel lobbyists and the justified fear around nuclear energy stoked by movies and dystopian fantasies has stifled reasonable debate in public sphere on the benefits and dangers of using nuclear energy.